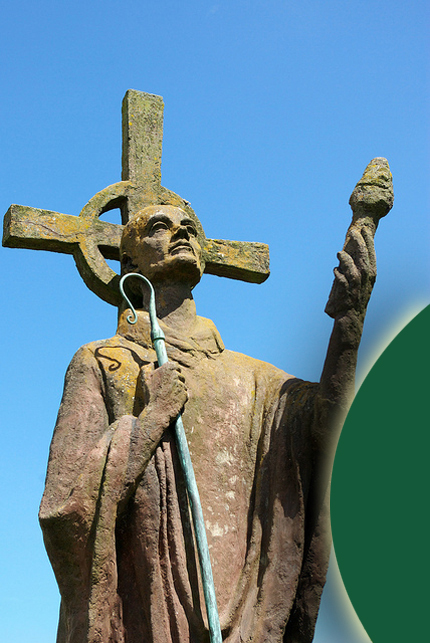 Saint Aidan was an Irish monk who moved to Iona about 630. His virtues shone so brightly that he was selected (635) as first Bishop of Lindisfarne, and in time became apostle of Northumbria. Saint Bede is lavish in his praise of Aidan writing that, "he cultivated peace and love, unity and humility; he was above anger and greed, and despised pride and conceit."

Aidan carried out the task of converting Northern England. He founded schools, churches and monasteries, and then left them to grow on their own while he moved on to a new place. Oswine, King of Northumbria, who had studied in Ireland, was a great friend of Saint Aidan, and did all he could for the Irish missioners.

A story told about Aidan and the King demonstrates the depth of Aidan’s love for God’s children. When Aidan grew older and found traveling on foot more difficult, Oswine gave him a horse from the royal stables. Of course this would be a great help for his journeys, but not far into his first journey with the horse, Aidan came upon a beggar and gave him the horse, elaborate saddle and bridle included, and then continued on foot. When Aidan returned, Oswine was furious, asking, "Why that particular horse? Couldn't you at least have asked for an ordinary horse to give the man?" Aidan retorted, "Do you care more for the child of a mare than for a child of God?" Oswine cast off his sword and knelt in repentance.

Saint Aidan died at Bamborough on the last day of August, 651, and his remains were taken to Lindisfarne. Again it is Bede who tells us that, "he was a pontiff inspired with a passionate love of virtue, but at the same time full of a surpassing mildness and gentleness."

His feast is celebrated August 31st.